You know better than to talk to me like that when I'm hurtin', Linda.

Want to experience what sweat equity is like?? Come a little closer and get a whiff. Shew mercy! If John and I both didn't sweat at least 5 pounds off, it'll shock me.

We put on our masks and the HAZMAT suits, which is the equivalent of zipping yourself up in a plastic bag. He and I got down to the *literal* nitty gritty -- 145 years of dust, soot, petrified animal poo, huge plaster chunks, dirt dauber nests, random and not-so-random pieces of wood, and wallpaper.

It truly felt endless after a while. With just the two of us (we can make it if we try🎶 ), it took a full day to do knock out the ceiling. We worked from a little after 12 noon until about 7pm. The house almost won the fight today. It got done, though!!!

There was no quick and easy way to pull the ceiling down. You could only do so much because of all the gunk that fell out in large, black clouds (seriously: *cough*). Then, we had to take it board by board and clean as much as possible as we went along.

John got on the ladder, and would then rip down a long board, gross things would fall, he'd tear the slatted boards off, let the plaster fall, and pull out old insulation and whatever else he could. When he was done with a section, 'the closer' came in (that's me haha). I started picking up all the big stuff -- boards with nails first, plaster chunks, and hunks of insulation. Then I took the warehouse broom & tried to get it all in big piles so we could start shoveling it into pails. Luckily, we found a couple of old tin pails with handles in the garage that were perfect for carting everything out to the dumpster.

It was non-stop. Seriously, we didn't really take much of a break except for a quick breather, water, snack break/lunch, and back at it again. We didn't want to give ourselves a chance to stop long enough to think. Or put it off. In it for the win! All John & I cared about was getting it FINISHED.

Don't know if you recognize the room, but this is the music room. We tried to keep the doors closed with a fan in the window to help control the dust, which explains why we looked like we did afterwards!!


John's Mom came back up to the house towards the end of the day, carrying out our pails of debris and plaster, and the word she used to describe us was "pitiful." Ha! It almost broke us...but we persevered!!!

We still have a couple of things to do in this room: 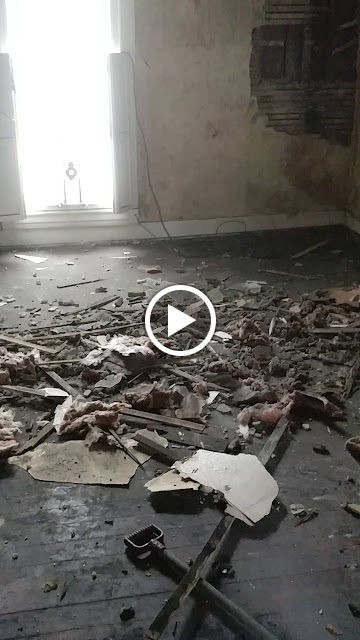 After a while it almost didn't matter what we wore, our bodies were covered with soot and grime. My left leg got covered somehow (?!?). If you're a Facebook or Instagram friend, then you already saw the picture of us afterwards...John says we looked like a couple of chimney sweeps from the 1800s. G'day guvna! 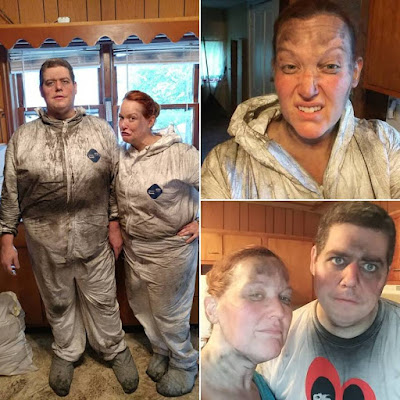 In the meantime, John's Mom did some work in the back bedroom -- she took up the carpet and padding, and started pulling down some paneling. That helped the cause a lot! Underneath the carpet was just plywood, some of which had rotted underneath the window with the air conditioner. Looks like there was quite a bit of water damage, so we'll have to replace that. No biggie. We'll be cutting into that part of the floor anyway, so folks can get underneath for heating and air, etc. 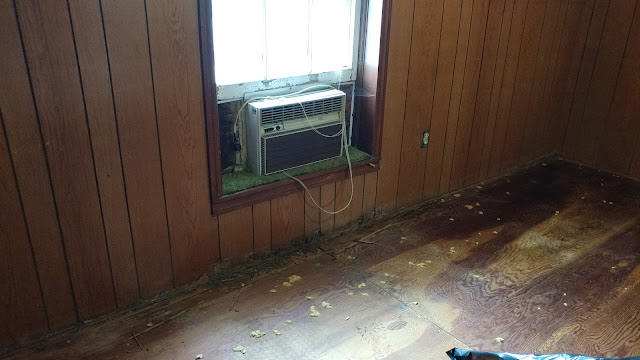 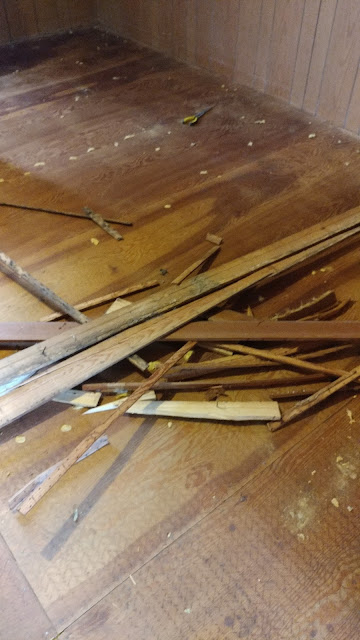 I haven't even remotely thought about what we want this back bedroom to look like...no clue yet!

Theresa also checked to see what was under the floor in the back bathroom. Orangey linoleum. I have to say, I love all the layers to this house, just to see what was done to it and covered up. There's always a surprise! 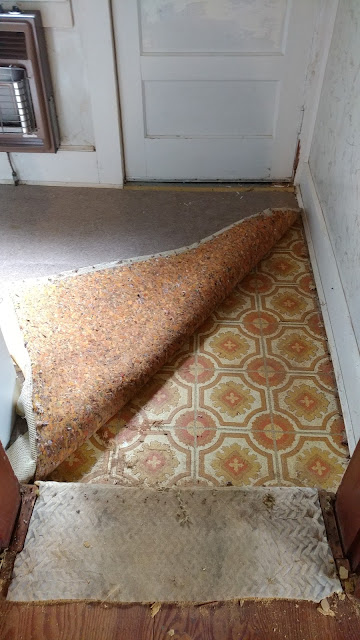 Lastly, you've got to see what our dumpster looks like now. Time to empty this nasty thang out! 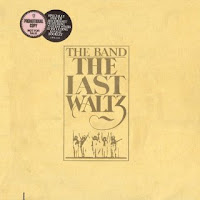