I tell you whut...whoever said that the worst was hopefully over was extremely naive.

Alright, that was me.

I finished taking the dining room ceiling last week. There's still more to go, obviously; but holy cow, I'm so glad that's done and over with. Luckily, the rest of the particle board came off (mostly) in big chunks, which helped the cause tremendously. The extra layers of wallpaper and fabric just ripped right off.  This time I didn't wear my suit because it was so hot last week (but did have my mask on), and I was covered head to toe in black soot and dirt. It always makes me laugh once I actually look at myself in the mirror. It's a ridiculous sight.

Oh! I figured out the mystery of all the nails in the ceiling (no doubt you'd forgotten about it, but this was something I couldn't let go). The particle board was nailed onto the bead board, THEN it was covered with a layer of something, THEN more nails were put in and THEN the tiles. Lordy. This house literally has so many layers to it.


Unfortunately, it seems like we're going to have to rip the bead board down, too -- it's in rough shape. There's water damage in one corner of the room and so much gunk up above it that must come out. 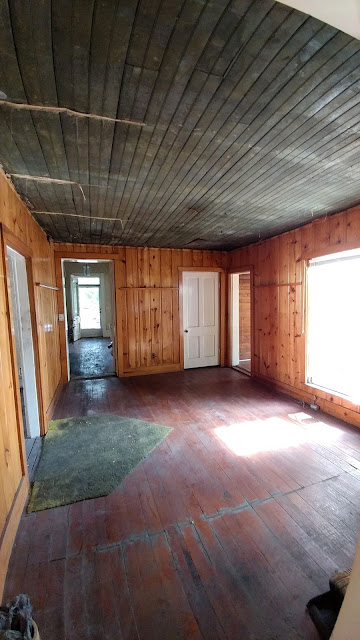 Below is a close-up of the ceiling...eh, well. Despite that, we plan to replace it with new bead board, so we can keep everything as original as possible. It gives the dining room and kitchen a homey kind of warmth already.

Last week, you remember I mentioned John's Mom and Grandmother worked hard on the back bedroom.  This is another room where the ceiling was lowered twice. Their helping hands finished getting down all the office-style ceiling tiles and metal grid that went with it. I can't say how much it was appreciated!! 💓

This afternoon, John & I got down the layer of wood paneling that was under the ceiling tiles they took down. It wasn't as hard as we thought it would be -- I thought it was nailed to the boards, though luckily they were only screwed in. We noticed the ceiling above but didn't think much about it at the time.

John & I removed the window unit in the room so's I could put a fan in the window and noticed the entire window will have to be replaced. It is completely rotted. Ah well.


Once the paneling was down, he went to mow the yard (totally not in the mood to deal with a messy ceiling situation) and I suited up in my sexy reno-romper & got to work.

I didn't realize that as the ceiling tiles came down, more plaster, soot, dirt, and insulation would come down with it. At first, I thought,  "#%&!*" (you can fill in the blank there). After thinking about it for a minute, I looked back up, and it occurred to me that the ceiling above was plaster. Hmmm...

The general consensus now is that this part of the house may actually be original (!) and not an add-on like we thought. It makes sense because the plaster and boards match the front part of the house. Ohhhhh she's holding on to so many secrets -- that little minx! 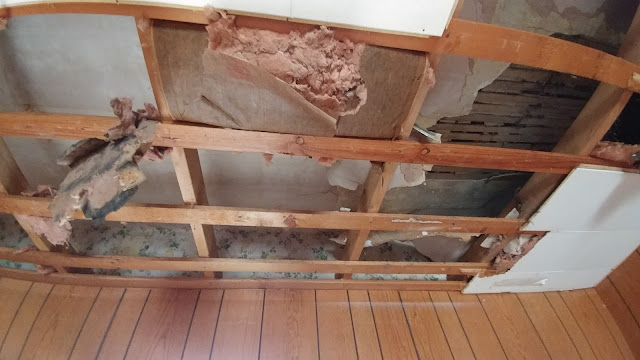 As you can see in the photo above, the wallpaper under the paneling goes up to another level of ceiling. Fingers crossed, we don't have to take all the plaster and slatted boards out (if we do, so be it), but it looks like some of the rest of it is okay. More demo over the next couple of days will tell us for sure...