Light at the End of the Tunnel

We may be as weak as a litter of kittens now, but a lot got accomplished yesterday. The end is in sight. Don't get me wrong -- we still got thangs. to. do. but there's not too much more demolition left. Feels very weird to be able to say that but it also feels really good!

John's Mom got up to the house before we did and got the paneling in the back bedroom completely down (bless her). There were a few interesting discoveries: a couple of hidden doors and a fireplace! I knew it. For some reason, ever since I saw the weird little closet, there was a feeling in my gut that it was a doorway. 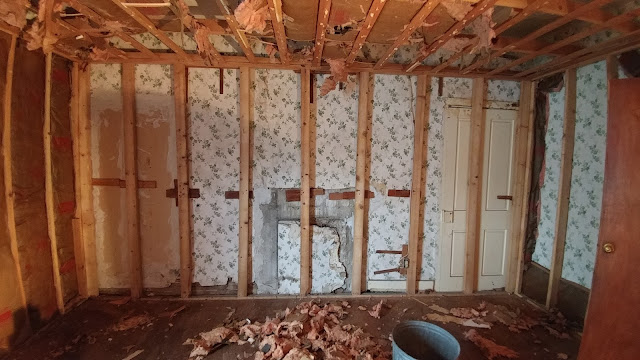 We made it through that moment and started by simply removing the wood beams -- just to see. Luckily those came down easily and we thought -- and our contractor later confirmed -- that we can just nail the beams back up on the ceiling, laid down flat, and then put sheetrock over them. There are a few patches that will have to be dealt with before putting up sheet rock, but overall, it's fixable. 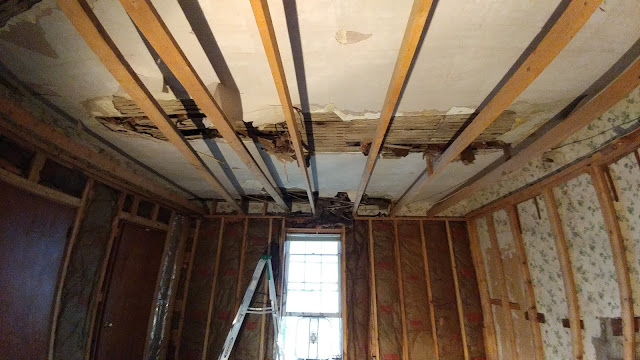 I bent over to sweep some things up and felt a rip in my suit...aaaaaand, you're welcome.

Meanwhile back in the utility room...Theresa took out a little closet (pretty uneventful as far as photos go) and she also got some paneling down which exposed the former back of the house. Cool! 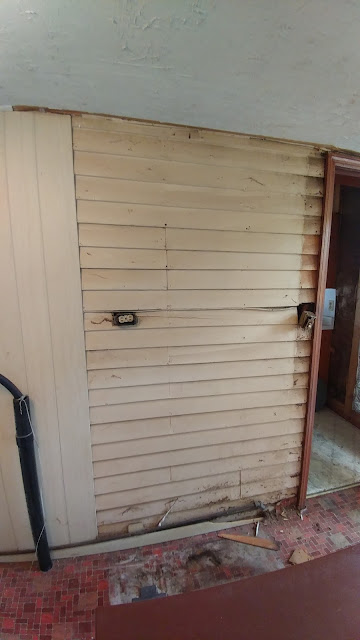 So, here's where the house's story gets a little muddled. These plaster walls and layers of wallpaper almost throw us off the trail because our contractor looked up into the ceiling in the back bedroom and said that he could see the original roofline. Hmmm..Even if these rooms were added on, they were a very early addition. Plaster was used as wall material until the 1950s, so regardless of when the addition was, it is still old. Next week I have to do some digging if I can. It would be great to find out some more information on this ol' gal and see if our discoveries line up with actual house history.

John removed the door frame and tore out the rest of the wall attached the kitchen cabinets. It has been fun reimagining the kitchen/dining space -- and I think we've finally figured it all out...you'll see soon enough! 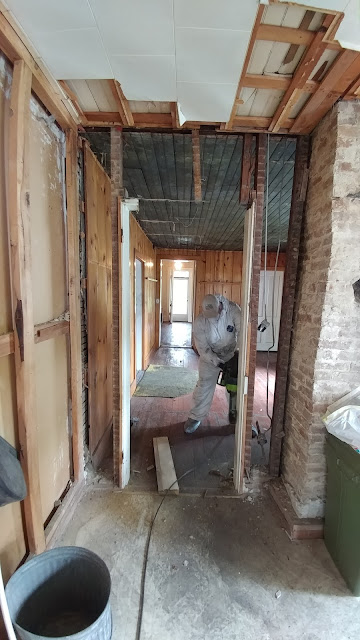 The last big job of the day was removing the dining room ceiling, though I hated to see the green bead board go. Once it came down, it was clear that ripping it out was ultimately the best thing to do. It was not in the best shape -- our contractor said it looked like there was a fire in the house at some point. There were some crispy rafters up there.
Shew -- what a mess! More insulation, soot, boards, and a ginormous collection of animal poo. Ick! It feels great to have one more thing completed. Now it's a clean slate and ready for the next phase.
Looking up into the rafters you can see the old gas lines, electrical wiring and the roof. 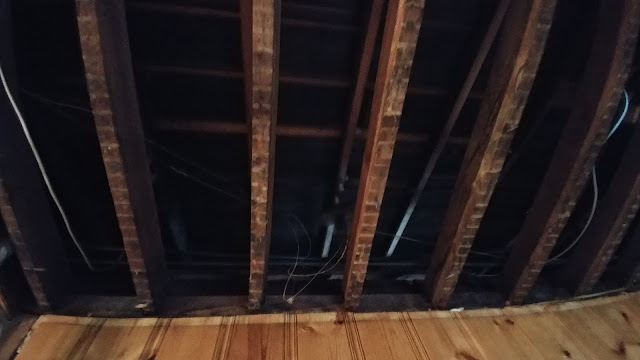 Once that was done, I finished pulling down all the tiles in the kitchen ceiling. As you'll see below, there is a grid up there that they attached the ceiling tiles to -- so we're not sure that the bead board will survive that. We shall see...

This is what it looks like now that I took the tiles down:

I'll post some before and after photos next time so you can get the full effect of the demolition and also share with you a few treasures ("trayshures") we've found in the process.

We've got a busy weekend coming up -- hope you have a good one, yourself!