Hope everyone had a great Memorial Day weekend! We had a halluva show on Friday night, played a rehearsal dinner on Saturday night, wandered around like zombies on Sunday, and enjoyed exploring the Red River Gorge yesterday.

As promised, I wanted you to see a few of the things we found during this demolition phase!

One of the first things that appeared was a heavy, lead bar (about the size of a Snickers bar). John found this as we took down the wall between the kitchen and dining room.

Apparently, N & G Taylor Co. is a company in Philadelphia, PA that made tin, lead, and other metal products. From what we can decipher, during the mid to late 1800s, this block of lead was kept by the fireplace and used to make bullets. They would heat up the bar and shave off a chunk to then form the bullet. Pretty cool, huh?
A few days later, I swept up this old Liberty Head nickel from 1908 -- it was when we took out the wall and tiny weird closet in the music room. My earholes perked up at the sound of something scraping across the wood floor -- and I bent down to pick up this gem.

That's the same day that we uncovered the initials scratched in the plaster behind the closet paneling.

I plan on putting a 2017 quarter in the wall once it's time to put up the sheetrock and sign our names somewhere. Now that I'm giving it some thought, my brain is conjuring up visions of a time capsule to put in the wall somewhere! What things would you include? I'd love to hear your ideas.

Last week, as we took down the rest of paneling attached to the kitchen cabinets, we found this metal Eagle platter, which John absolutely loves. This will get a place of honor in the dining room. 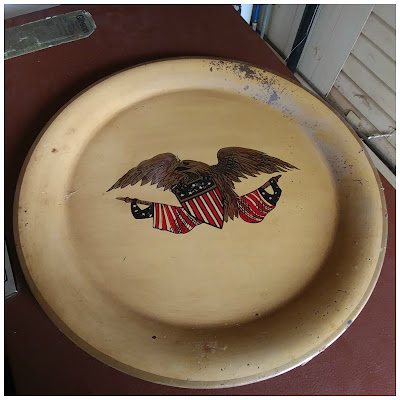 When Theresa dismantled the utility room closet, she found a pair of little rain boots with heels. I thought they were so cute! I'm sure it saved its owners' shoes on many a rainy day. 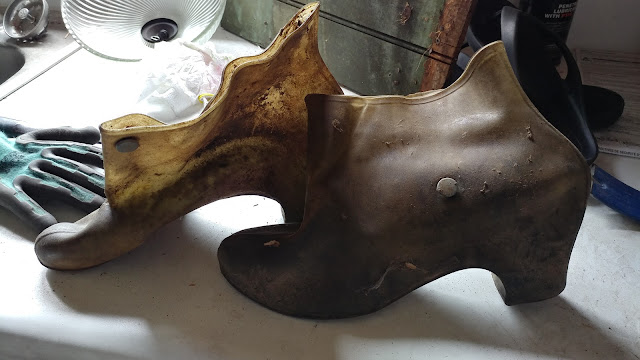 That's it for now -- I'll let you know if we find anything else in the meantime!

This week, we're going to get back to work. Two things that are on my list: #1 See what's under the layers of linoleum in the kitchen and #2 pull up the plywood floor in the back bedroom. I want to see if my intuition is right about more hardwood. I could be way off base but soon we'll both know!
Labels: 1870 first time renovation first time renovators gothic revival house italianate kentucky old house renovation restoration southern united states Victorian Eclectic victorian folk victorian house
Location: Kentucky, USA