This old gal has no more secrets to hide. Anything and everything that could pose a potential problem -- be it structural or otherwise -- was found and fixed over the past few months and is behind us. Can't believe I can finally type that.

Over the past few days, John worked hard to staple insulation to the walls and ceiling. Also, all the trim is now stored until it's ready to be put back up. It all had to get done quickly this week because...

The sheetrock was delivered to our house yesterday! It's going to totally transform the interior, and I'm damn near beside myself. We made it. We did it. We survived. We still have a ways to go. haha 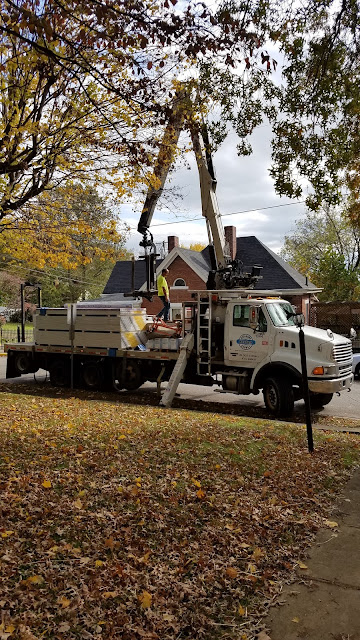 The heat & air guy also came by yesterday to tie up some loose ends and run our gas lines to the kitchen because...

The kitchen appliances will arrive within the next two weeks. Eeeeeeee!

The electrician also stopped by to install the can lights in our dining room and kitchen ceilings. They are live! There are still a few more electrical-related things to do, but some of that requires a bit of a wait until the front bathroom is ready and we get the bathroom mirror up.

John and I recently played a beautiful wedding at the GlenLary Estate in Paris (KY) and had a chance to go inside the house. It is amazing! After spending a few minutes in the kitchen, we noticed we both liked the color of the cabinets. This color, in particular, had a different vibe depending on the light -- from khaki to army-olive-ish to a sage-y grey. John & I have a highly technical term for it: "Gleen Glay."

The debate about the kitchen cabinets has been non-stop lately, and thankfully the GlenLary kitchen helped us narrow the gap. It's now down to 3 shades of sage green. Green was the color that I initially wanted to use but after you make a billion decisions and your partner likes something else, and if that choice is good, too (slate blue), it gets to the point where you ain't got the will or constitution to challenge it.

John's Mom took the screen door & its trappings off from around the front door frame -- and the trim around the door is similar to the rest of the house and very pretty. We took a peek under the siding, and the wood underneath is a little unusual in a cool way. I'll see if I can get a picture of it so's you can see, too.

We have some great neighbors around us. Just a couple of months after we closed on our house, we found out a couple we knew bought the house right behind ours. Their house was built in 1876, and they are a few months behind us in the renovation process.  Their house is much more livable than ours ever was -- they don't have to completely gut it -- but it's still a big project.

It's been so great to compare notes, vent our frustrations, and offer support to each other during the process.

**UPDATE
The electricians installed our front porch light! I spotted this fixture at an antique store and fell in love. The globe is "hobnail" glass, and we absolutely love the way it looks. I asked John if he wanted to jump up and down with me and do a happy dance, but for some reason he wasn't interested. 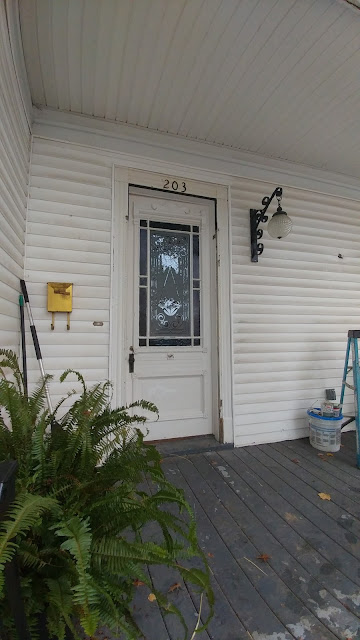 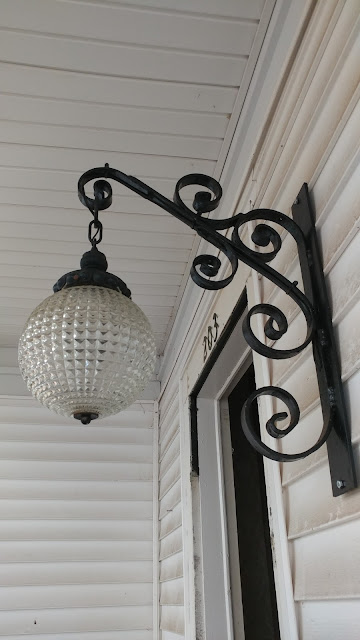 Much will be happening in the upcoming weeks -- and as always, I'll keep you in the know!