I'm sure you've seen online that we moved into the house!! Yay! We thought it might never happen.

After working on this place for so long (a year and 2 months...who's counting...), it's got a feeling of familiarity with a side helping of I can't believe this is ours, plus a big ol' dollop of weird. It's dang-near unbelievable that it's a real house and not a shell and that it's really ours. Like, for real in real life.


John and I are still a little stunned that we have this house, period. For years we've been talking about restoring an old home and we travel so much and have used each home as a landing pad, it felt like something that might happen way on down the road. So when the opportunity truly fell into our laps, and it happened sooner than we anticipated, well, we had to pinch a plug out of ourselves to remotely believe it (not literally, cuz who likes to get peenched...??).

We've been hearing through the grapevine that y'all want more pictures! Can't say that I blame you ;) I'm going to make sure there will be a good before & after post once we get settled, for sure.

Let's do a little catching up, y'all!

The last couple of weeks were hairy with the final push to get everything done. It was mostly touching up the trim and the walls, which I assure you, was nothing exciting. The work was a lot of hurry up and wait. We'll just leave it at that ;)

If you've driven by the house, you've probably noticed our front door is a panel of super flashy plywood. You love it. Admit it.

There's a door guy in Georgetown, well, his name is Guy. So, Guy the door guy is currently transforming our front door. Initially, we were going to try and do it ourselves but after he explained the process and all that went into it, John and I got nervous and decided to leave it to the professionals.

You saw the photos of the beautiful colored glass windows that came from John's mother's house? Luckily, we can use that glass to replace what was broken on the door, so it will still be period & local (ha!) except for the middle piece which will be a new piece of restoration glass. There was an option to replace the middle pane with old wavy window glass but if the door gets slammed frequently and/or people knock hard on it, there is a potential for more cracking and breakage. The restoration glass looks old but is much more durable. Duly noted. The colored glass had already gotten cracked from the ins and outs over the past year, so restoration glass it is!

Getting ready for the journey: 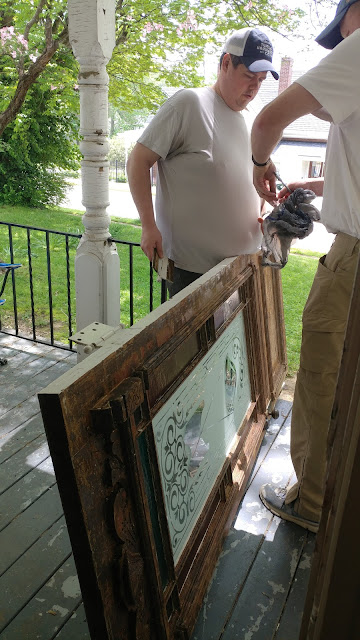 We got to visit the shop in Georgetown. Guy the door guy said it was a shame that someone had kind of burnt the door with a heat gun but luckily it won't even be noticeable once it gets refinished. Gah! Thank goodness we don't know the person who did that...(see above for reference).

The door looked absolutely incredible with all the paint stripped off and I can't wait to see what it looks like after all is said and done. His other work is gawjussss. Should be any day now that we get the call to bring her home!

The picture below was moments before we decided to let them go ahead and finish the door...


We also got our corbels back from Guy the door guy — he used the same chemical process to take all the paint off of them and said it took him five (5) sessions to get it all off! They were covered and caked with years of paint. Below you can see what it looks like now. The overall effect is really cool in the room!


In the meantime, the front of our house has gotten a much-needed facelift! The porch roof had all but rotted. It's a wonder it hadn't fallen in completely. I think with another summer of rain, it would have definitely collapsed.

Below is a photo of the house when we first bought it. You can see the black metal railing that was put up at some point, that was more utilitarian (I guess?). You can also see where it bows badly above the corbels and columns. Since then, it became even worse. 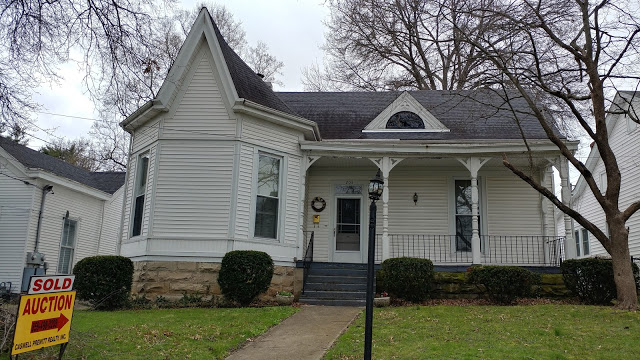 Several months ago, we went to an architectural salvage place in Cincinnati and found some old spindles. There were a couple of different kinds, and we loved the idea of a little mix and match. Playing up the Victorian eclectic gothic vibe. I found a picture on Pinterest of a mix-match porch spindle situation on a Victorian Gothic home and it was stunning.

Of course, I can't locate the photo now, but here's a similar idea: 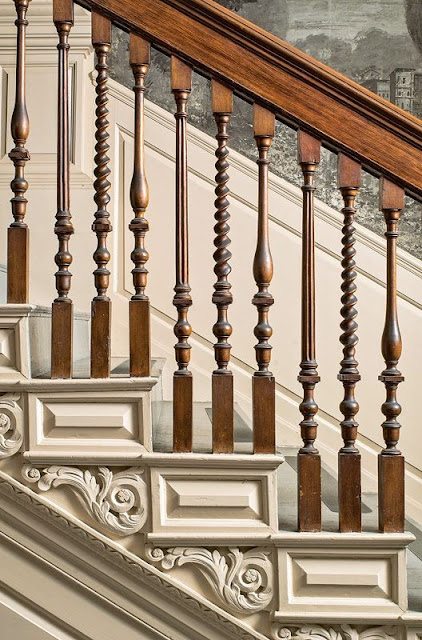 These are the spindles we found: 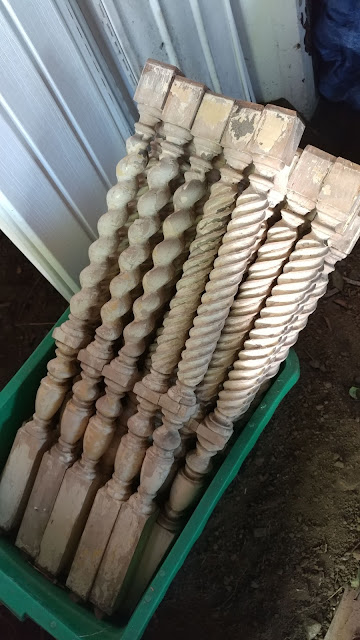 Now on to this porch! First thing, Greg & Tyler —  or the dynamic duo, as I call them — got to work pulling the porch ceiling down. With the daily summer storms we had this week, it's a good thing we got it fixed.

Behold, the stages of demo. 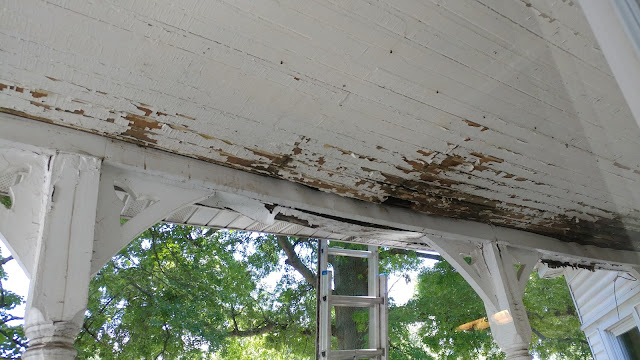 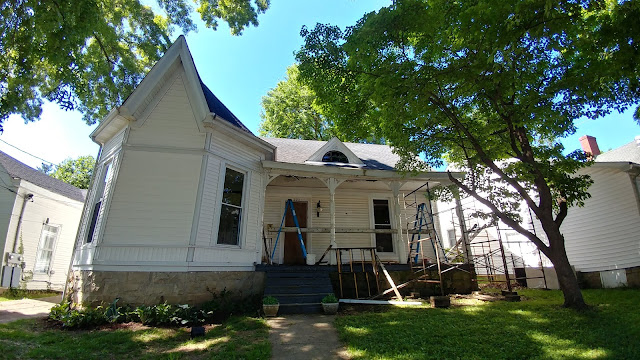 It doesn't look too bad until they dig a little further...that's a lot of saturated yuck! 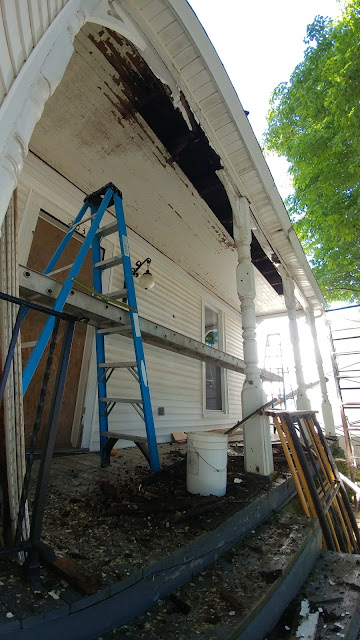 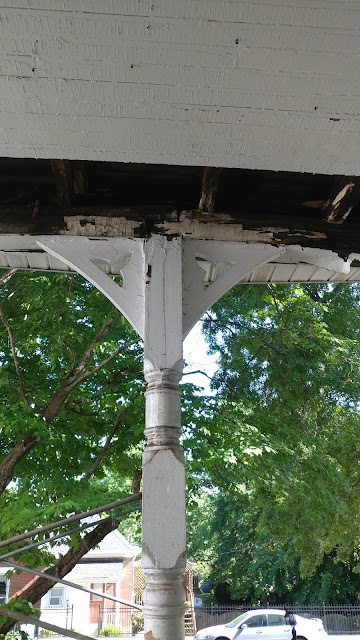 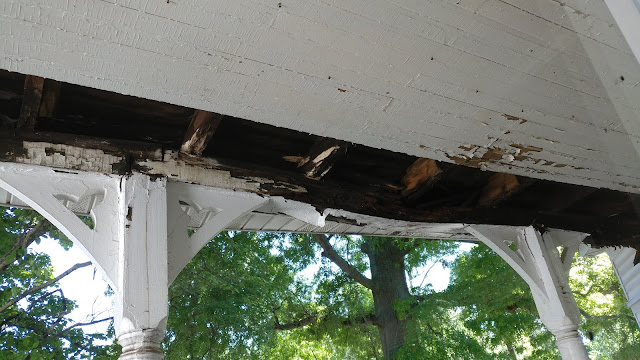 It is very surprising that it hadn't caved in before now.

In the meantime, as Greg & Tyler took the columns & corbels off and replaced the overhang, we made sure they stayed happy with snacks and the occasional afternoon run for a root beer float. Treat:thirty!! 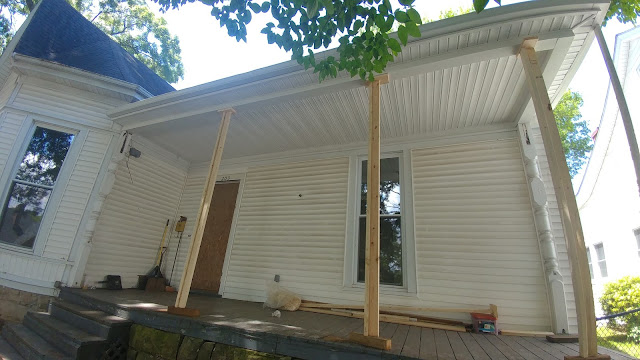 This is my favorite part. Well, not the part where we stayed up until about midnight sanding and priming the spindles (oof), but the part where it was time to put the railing together! Greg got us some redwood rails and got them ready to attach the spindles.


What's crazy is that we had the exact number of spindles needed. We didn't plan that, it was just a happy accident. BIG sigh of relief. 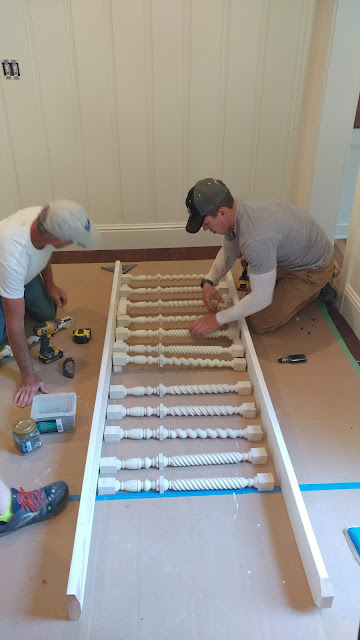 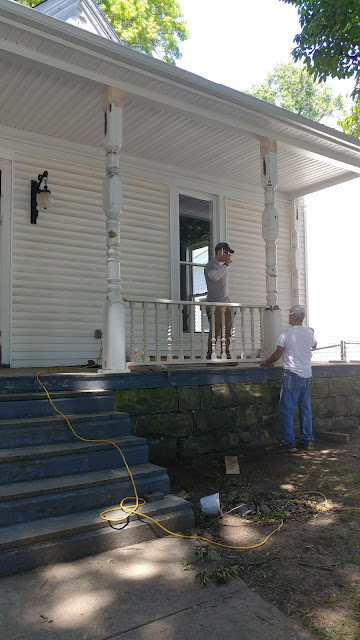 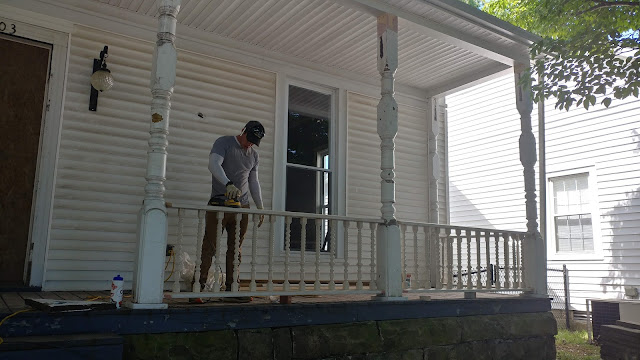 The new railing gives this grand ol' lady her Southern charm back. She's really coming into her own.

Now we have to decide what color we want to paint it all. A few weekends ago, John and I drove over to Paris to look at the old homes around the square and took some photos of front porches that we like. We also went gawking in Lexington, too and found a cool side street downtown that had some gorgeous Victorians. That's one of the things I love about living here.  There is a lot of inspiration for our (and any) restoration project. 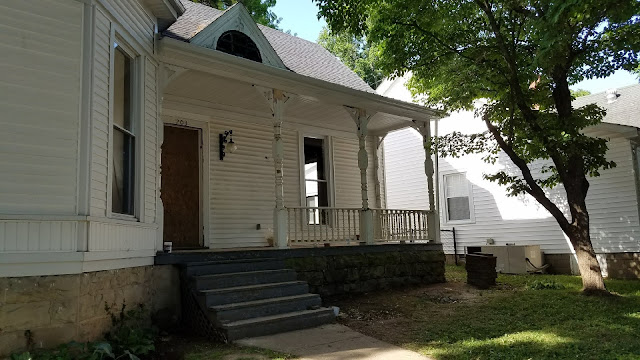 We also had our washer and dryer delivered that same week, too, which was pretty exciting!!


It may take a minute for me to get a couple of good before and after posts, especially as we are settling in and figuring out where we want everything to go. Keep your calendars open Court Days weekend in October. We're planning a big open house then. Make Court Days great again! I kid.

We'll have enough time to get the house (sort of) like we want it and have a little off-time from traveling.

Oh, I'd hate to leave you hanging, so would you like a couple of teasers??

We've been hanging pictures, rearranging furniture, and still have a few more projects left to wrap up. There are some shutters that need sanding and painting that will go in the front bedroom and other odds and ends.

It's a good feeling to wake up, look around the room and say, "Hey, I did that." And, in the same breath, "Thank goodness that's all behind us!"

One evening recently, John and I went to pick up some dinner at a local restaurant. Initially, I was going to wait in the car because my clothes were covered in paint and dust (shocker). In short, I was a hot mess. He talked me into going inside because he needed help carrying food out. We walked in and one of the waitresses immediately stopped and said, Oooo...you're so dirty!!

We both laughed. A lot.

We are so grateful for this experience and even more thankful for the gift of a roof over our heads, but you know what I mean. Feels great to finally enjoy the time and work we put into it. And not be a walking. hot. mess. every. single. day. Unless I wanna be!

Have a wonderful week, friends!!