There were several projects waiting patiently in the wings while the big stuff got done. We realized in December it was time to get going because...

Next week, the flooring folks will be here to sand the original floors, lay down the new floor, and tile the bathrooms. Our baseboards & trim all need to be painted and the tub has to be ready to install, among other things.

After John and our buddy Jason got a huge portion of the painting done, they began to fit the beadboard ceiling in the long middle room (dining/kitchen). It was a major pain in the neck because the ceiling still wasn't level, so they had to use shims to get it relatively level-er. Though it was a chore, I appreciate their hard work -- it looks so good, and I absolutely love that it recreates the original look of the room.

Do you remember what the old beadboard looked like? It was pretty crispy but I loved it.


Man, this room -- it's been through a lot. The wall and chimney came out, and so did the uneven flooring. The whole room was wonky but has since shaped up to receive the award for Most Potential.

Alright. Why we're here. Until to this point, I've never been a DIY project kind of person. I'm the one who goes down a Pinterest hole, thinks Oh, that would be great! And that's about as far as it goes. Not always -- but, yeah.

Now, the moment of reckoning is upon us...

This ol' gal. Remember her? The clawfoot tub -- well, the whole bathroom -- was drownt in pink hibachi sauce. She was due for a stripping and sanding job. haha 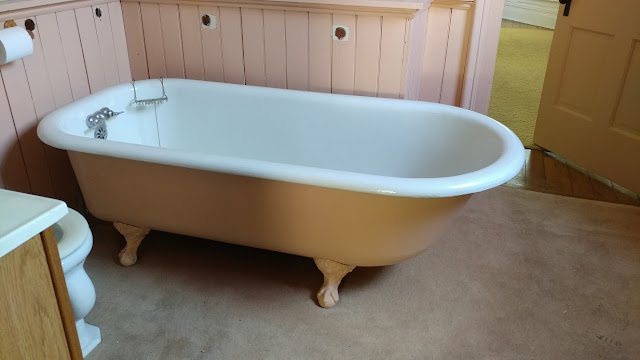 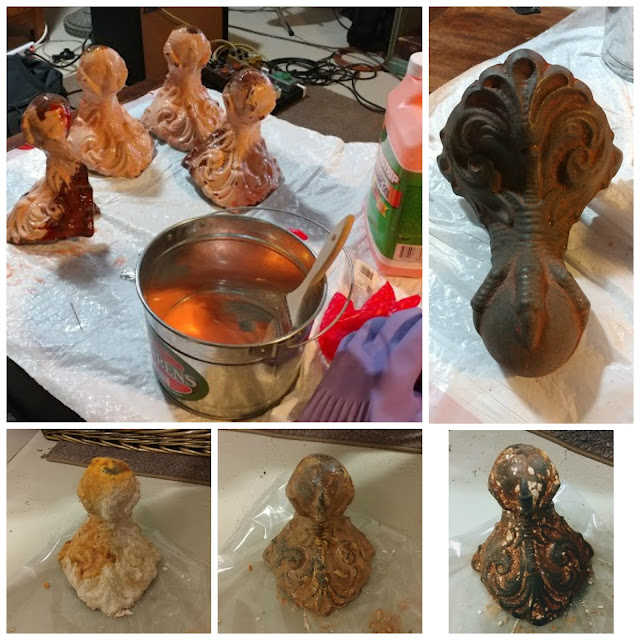 Shew mercy. There were at least 3 layers of paint that were happy enough to stay stuck on that leg! The paint covered up so much detail on the feet. Finally, it was as good as it was going to get and they got a coat of rust-preventative primer.


They are almost finished though I can't let the cat out of the bag just yet. #waitforit I want them to be completely finished before they're unveiled. heh heh

In the meantime, I started sanding the exterior of the tub.

Lesson learned this week: power tools are so fun. I worked a total of two afternoons on the tub, cruisin' through 4 paint layers using a 40-grade sandpaper and an electric sander.

That is a misleading statement.

After the first day, my arms were jelly and I pulled an ass muscle but luckily it didn't slow me down too much. Not all of the paint came off but it smoothed out well enough.

After the primer coat dried, I brushed on a coat of color paint but it's not ready for a reveal yet either. It needs a second coat and I'm still warming up to my decision, truth be told.

If you're on Instagram, then you may have seen the door hinges I posted. Earlier in the week, John came home with three bags full of door hinges, key plates, and internal key box mechanisms (no clue what they're really called), all covered in thick layers of paint.

Again, my time had come.

I'd watched a couple of YouTube videos but actually doing it scared the heck out of me. You know, that part where you follow through with it.

John's Mom gave me old crockpot of hers to use and I dropped them in the hot water. Even after a full 24 hours, it was still a challenge to get them stripped clean. The paint loosened & did come off more easily but overall it held on for dear life, even after I put paint stripper all over it and scrubbed the hail out of it.

John's Dad offered to put it under a wire brush attachment on his lathe. Initially, I was apprehensive about putting a wire brush to it, but in hindsight, it was the best decision. Changed the game! It knocked off the majority of paint and dust that refused to budge. The hinges have a beautiful sheen -- you'd never know they were submerged under all that gunk.

What do you think?


Now. The back bedroom.

The color we brought home was "Metropolis," a pretty gray, in theory, which ended up looking periwinkle...Whoops.

It wasn't a color we could carry off with conviction and it was also just too dark. We thought it might work but nah. The room doesn't get much sunlight as it is. It needs a much lighter color so guests don't feel immediately compelled to reach for their antidepressant of choice.

We tried out two samples of a truer gray on the wall, putting the periwinkle into perspective.


I put the first coats on the walls yesterday. The lighter shade (L) in the bedroom perked the space right up. The other gray (R) is a little darker and we put that in the back bathroom. Yes, they are very similar colors and we're laughing at ourselves right now.

There is still so much left to do but the momentum feels good. Yes, I'll take it.

I hope 2018 is treating you well! Are you working on any DIY or special projects at home? I'd love to know. If you're perfectly satisfied just watching us do all the work, I totally get that.