The Office Oddity (aka Shiplap Frenzy)

There is this strange little room off the back of the master bathroom. Besides the entryway, this is my next favorite room so far. It's tiny and has a lot of promise, so I staked my claim for my office! There's also a pretty awesome built-in bookcase, too.

Maybe it was a porch? Maybe it was a pantry. There's a pretty big burned spot in the ceiling, so maybe a wood stove was in it? I'm pretty certain it is part of the original house.

After pulling up staples for quite a while (miles to go before I sleep), one of our good friends stopped by and gave us a reason to take a break from work!

She hadn't seen it since we tore up the carpet and got to look around. It's so fun to see these rooms transform. We were standing there, wondering about this little office and John decided to go ahead and take off the paneling to see what was underneath. He tore off a piece of paneling.........

There it was. The original wood walls. John's Mom happened to stop by soon thereafter and we all got to share in the excitement! Granted the hard part of the renovation hasn't happened yet -- so who knows what we're in store for -- but man, this house keeps revealing little treasures.

The lady who owned it recently passed away at 104 years old. Her neighbor and good friend, Ms. Bettie told us that for the past 20 years no one lived there, except her sons when they came through to visit from time to time. It's damn near perfectly preserved. 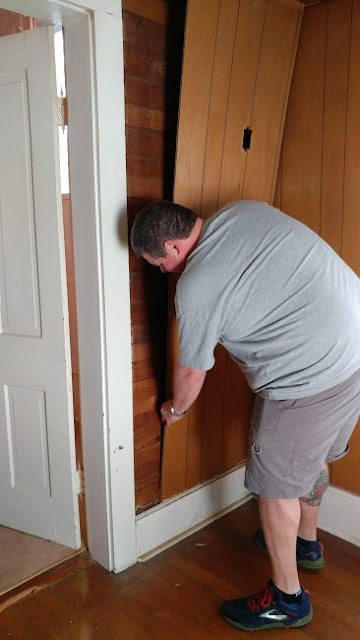 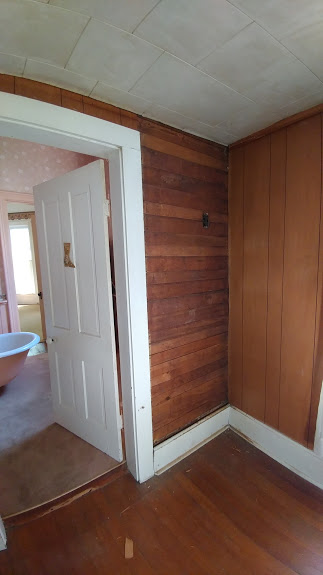 Look what's underneath the ceiling tiles!
I'm so excited about this room especially now that the wood walls are exposed. Ultimately, I want this room to look like it belongs to someone who's been on a Lewis & Clark expedition. haha That just my way of saying I want my lair to have botanical and animal prints on the walls, old pictures that I've collected -- a place all the things that I've gathered from our treks and travels.

There's also a beautiful watercolor portrait of a Choctaw that my Mama's artist friend, Kay, gave me a few years ago after I'd worked as a researcher on this project when I lived in Jackson, Mississippi. It will have a place of honor on the wall, too.

Check out the room now!

The process of collecting cool pieces for the house is underway. The decor won't be overly Victorian or anything, but we do want some period touches. A couple of Saturdays ago, we played at a flea market event in Bowling Green and I got an old schoolhouse desk for my office for $45 (!!!). Once it gets a little facelift, it's going to look really cool in that space. I also found two old gorgeous glass cabinet doors (they were probably from an old china cabinet) for $40 that we'll use in the kitchen. That makes me happy!

Last weekend we took a road trip to Knoxville to see a friend of ours who owns a music store and vintage shop. He's closing his physical store and selling a few things he's collected over the past several years. We saw a few things we need: an old vanity and two cool display cases. hehehe John and I are on the prowl, my friends. 🐾